On our final day of vacation, we had set the alarm to wake us at 5:30 a.m. We’d been told that it would be well worth being topside of the Ruby Princess by 6:30 to see the sun rise over the Adriatic Sea as we cruised into Venice.  Bundled in as many layers as we could gather from the light wardrobes we had brought on this cruise of the Mediterranean, with cameras and coffee in hand, we staked out our spots at the starboard rail.  Though the light was still dim, we could see the beginnings of dawn as the sun sent the glow of its promise to ascend on the eastern horizon, astern of the ship.  With the various bell towers of Venice in the distance, we sipped our coffee, mugs warming our chilled fingertips in the damp, fiftyish degree air. 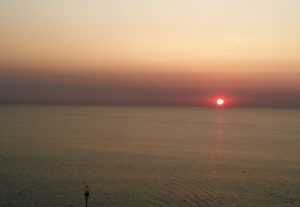 atted over the PA system, talking about the centuries passed since Venice’s beginnings.  As the golden light behind us gave way to a more intense, coppery rose color, we began to see some of the islands in Venice’s outer harbor.  I was surprised by the length of time it took to make our way into the actual port of Venice once we began seeing ocean-side industries. When the top arc of the sun finally showed itself above the watery horizon, it was a brilliant fuchsia, bringing to mind the “Red Rubber Ball” in a 1960s pop song.  It was beautiful.  Eventually, the narrator quieted, allowing us to fully soak in the experience.  After a few moments, the first strains of familiar orchestral music replaced her voice.  Appropriately, Andrea Boccelli’s recorded voice sang “Con Te Partiro” and other Italian songs as we continued into the heart of the port.  It was almost too much for the senses, and my vision blurred more than once. 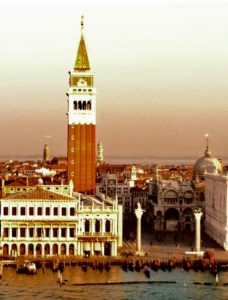 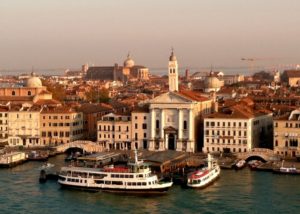 Now able to see the city and its people beginning their day, we sailed past beautiful green spaces where people strolled with their dogs, public squares populated with hurried morning commuters, apartment buildings and churches (ALL with beautiful bell towers, some domed and others spired).  The confluence of Gothic, Renaissance, Byzantine and Moorish architecture gives the city an elegance and intricately detailed appearance I have not seen elsewhere.  From our perch on the fifteenth deck, we could see some of the canals and bridges that connect the myriad islands that comprise the city.  As we closed in on our berth, we passed the Doge’s Palace.  Lined up at its front, side by side like a row of sleek new pens, was a flotilla of iconic, glossy black gondolas, not yet employed for the day.

When the sun was fully risen and our hearts and minds so full that I thought I might burst, we passed the tall bell tower at Piazza San Marco, close enough to hear its rich, bright tone pealing the eight o’ clock hour.

Our appetites honed for more of what Venice – and the day – would hold for us, we went back to our cabin to get ready for the adventure about to unfold.

Understandably, Venetians have since passed a law that prevents large ships from sailing into the city, due to the damage they caused.

We only had a day and an evening in the city, and since nearly seven years have passed since the above was written, I still clearly remember the details to follow.

We had opted for two side excursions, for which we were ferried to smaller islands in the lagoon: Murano, where we watched glass blowers create stunningly colorful glass dishes and vases. For a few minutes, I almost wondered if we were at Disney World, because the factory dumps its patrons right out through the gift shop. The showroom featured several floors of works of glass art, in every color, shape, and size. Much of it was lovely and had crazy price tags to match. A lot of it was just too over the top for my personal taste. We found a bowl we liked very much, all the way downstairs in the “bargain” basement. The companies will gladly ship your purchases home, so you needn’t worry about damage on your trip.

Here is a history of Venetian glass making: 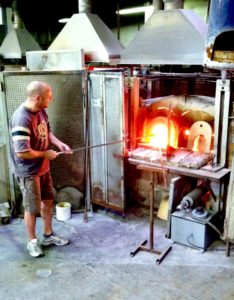 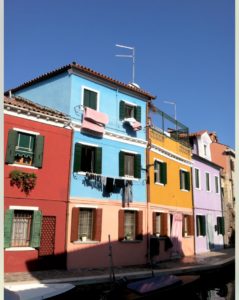 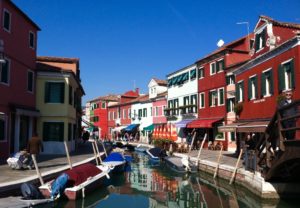